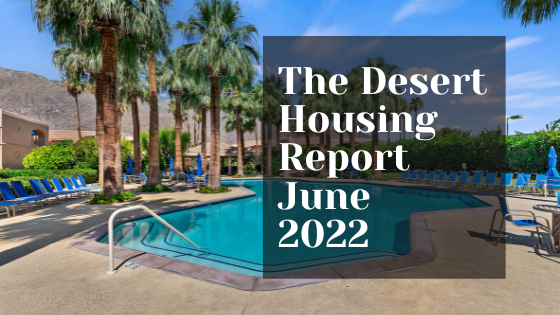 PRICES: The median price of a detached home in the Coachella Valley in June was $700,000, up 16.9% from last year but the same price as last month. The median price for attached homes was $490,000, up 34.2% year over year but slightly lower than last month. Year-over-year gains in detached homes range from 49.3% in Indian Wells to 17.8% in the city of Coachella. In the attached home market, four cities have gains over 40% - Bermuda Dunes, Desert Hot Springs, Indio and Rancho Mirage. We have entered the seasonal period when home prices slow, or even decline somewhat, and we expect that pattern to continue this year, perhaps even more so.

SALES: Total sales averaged 923 units a month in June, which is 23% less than last year. It is also about 7% less than average sales in past Junes before the pandemic. The decline is about the same for detached and attached homes. The 12-month average of sales, which takes out all seasonality, shows total sales averaged 893 units a month, which is 21% below last year. The largest decline was in La Quinta where sales were down 43%. This was followed by Palm Desert with sales off 24%. The cities of Indian Wells, Indio and Cathedral City show light to moderate declines. Sales in Desert Hot Springs were up 14%, probably due to homes in the city selling at much lower prices. Lack of supply in all price ranges continues to impact the level of potential sales.

INVENTORY & “MONTHS OF SALES” RATIOS: On July 1st, Valley inventory was 1,531 units which is 877 units more than last year. This is a 134% increase. What’s significant about this is that it is occurring during the season when inventory normally contracts. The “months of sales” ratio for the Valley was 1.7 months, up 1.1 months from a year ago. Like inventory, this is the highest ratio in over 19 months. The ratio is still below 3 to 3.5 months, which is normal for summer. The ratio in all the cities forms a tight band, which goes from 1.4 months in the city of Palm Desert to 2.8 months for the city of Coachella. The market still seems to favor home sellers but that appears to be rapidly shifting.

DIM: At the end of June, the median number of “days in the market” throughout the Valley was 21 days, which is one day more than last month but six days less than last year. Low inventory have kept selling times near current low numbers, but it appears that forces are in place that will cause selling times to increase. The city of Palm Springs continues to have the lowest median selling time for detached homes at 15 days, followed by Desert Hot Springs with 16 days. In the attached market, Palm Springs has the shortest selling time at 11 days, followed by Rancho Mirage at 16 days.